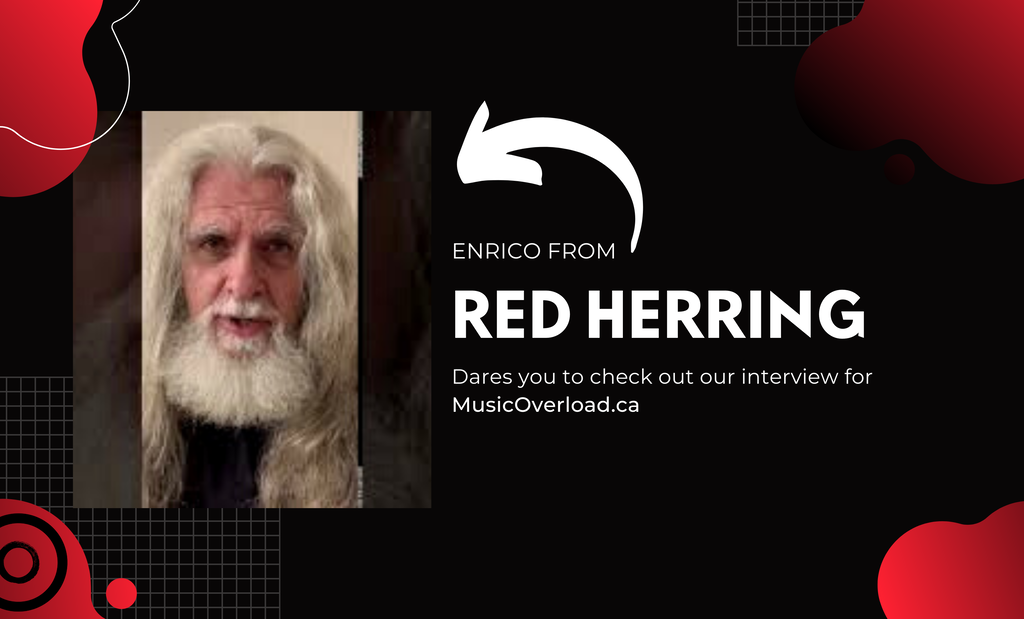 What began as a collaboration between songwriter Enrico Renz who was studying philosophy at UBC and guzitarist Stephen Nikleva who just finished recording with Ferron became a 4-piece band and now has grown to a 6-piece power house.
Presenting their latest material, we interviewed Red Herring to know more about them behind their music.

1. Stephen,this band has been around for more than 30 years now. How scary was the project at the beginning? If you could share with us a bit more about the creation and organic development of the group through time?
The band began when a former band mate of Stephen’s who was teaching in the Creative Writing Dept at UBC introduced him to Enrico as this ‘kid’ who was writing interesting songs. Stephen began collaborating with Enrico learning the songs and notating them to make it easier for others to play them, it was a challenge to find players, the jazz players could read the ‘charts’ but maybe didn’t have the right energy, the punk players couldn’t read music but had the energy! Well, a couple years later we finally found Steve Lazin (Drums), and Martin Walton (Bass), and began the Red Herring journey. We started a residency at The Waterfront and recorded our first live demo there, one song which ended up on a cassette release ‘Undergrowth’ of upcoming bands. We entered the first year of CiTR’s ‘Shindig’ a battle of the band contest, and even though we were underdogs as this new band, we won. This enabled us to do some recording, and even a couple low budget videos that got play on the new video channel ‘Much Music’. I don’t know about scary; it was certainly a challenge but I mainly remember the exciting shows we did.

2. I see, Enrico, that your lyrics are filled with interesting subjects, sarcasm and a lot of intellectual opinions. Can you share with us how you come up with your lyrics and/or what is the writing process that you follow, if any? Is the music talking to you or do you try to set a direction for each song related with a specific memory or event in life?
I appreciate you taking an interest in the lyrics. I’ve always valued sharp, fresh writing and strive to produce the same.  My internal editor is rather severe and wags a finger at even a whiff of cliche. Also, I want the language to feel natural without compromising the rhyme, rhythm or sense of the piece.  Making all of these things work together can be a challenge and tends to limit my output, but when a song does come together and people are intrigued, it’s worth it.

3. Where is Julia coming from? This song sounds like a refreshing new beginning in the middle of your new album, Neon.
Yes, Julia represents another side of Red Herring and underlines the versatility of the band.  While the song might come across as a love song, it’s really a call for courage and commitment.

Take a look at Enrico’s analysis of Julia’s musical structure in this short video:

4. Stephen, can you share with us two happy moments you recently had as a group?
Number one, our last show was at a small underground club The Wise Hall Lounge, where the singer’s son, who is an inventor, brought down a light system that looks like a whole bunch of living room lights on stands, except they are hooked up to a computer so he could change colors for different moods, it really helped make it a special show.
Also, with the whole COVID-19 thing the band has been on a hiatus but we did manage to do a band photo shoot by shooting us one at a time. This outdoor shoot at least brought the whole group together to catch up with each other.

5. What do you like about Red Herring? What is it that keeps you all together and enjoying doing music together?
The band, really values creativity. We are constantly finding ways to reinvent older songs so they are not stale reproductions of something that was done in the past. Enrico has such a fund of songs that the band has really only scratched the surface!

6. I am sure you have plenty of stories related with an unexpected songwriting process. Would you mind sharing the craziest inspiration for a song you have had throughout your career?
Well, coming up on our next release after ‘Neon’ will be one of those, that is ‘Check Your Posture’. Somebody in the band must have been at a chiropractor appointment before rehearsal and left a brochure sitting around.
Enrico picked it up and started to read verbatim from this and it gave birth to an educational, funky, and humorous song!

7. We can see a very specific focus on you as a band with your music. Do you feel sometimes overwhelmed with the way music is consumed nowadays? We realize that now musicians are not only the musicians only but also the social media experts, the producers, the managers and even the choreographers of their own videos. How does the new music world makes you feel as a band created in the 80s?
Well, I think there has usually been this gulf between the music and the music business, and in some ways, it still exists for most of us in the band which is why we hired a publicist team to help us! Actually, back in the 80’s we had a friend, supporter who seeing our weakness in promoting ourselves jumped in and became a ‘manager’ for a while. I guess one thing about the band in today’s parlance is that we have a strong brand-we were never trying to be the next pop sensation, it was about learning Enrico’s weird songs and creating new songs growing out of the band as a unit.

8. We are always interested to know what the last five songs our interviewees have played on their Spotify/apple music/CD player are (or however you consume music). Are you listening to anything in particular for the last couple of months?
I enjoy listening to the Jazz Radio app where I go to the Paris cafe channel when not otherwise exploring the thousands of vinyl records I picked up on my years of touring the world. (Stephen)

9. Enrico, using only unexpected materials, colors, shapes, flavors, experiences, tell us how your music sounds to your own self?
Burlap & Silk.

10. Last but not least, Enrico, if there were no boundaries at all, what would be your craziest wish or dream if you could ask for at this moment?
To see what’s on the other side of the Big Bang.